Choosing Numerology For All the Right Reasons 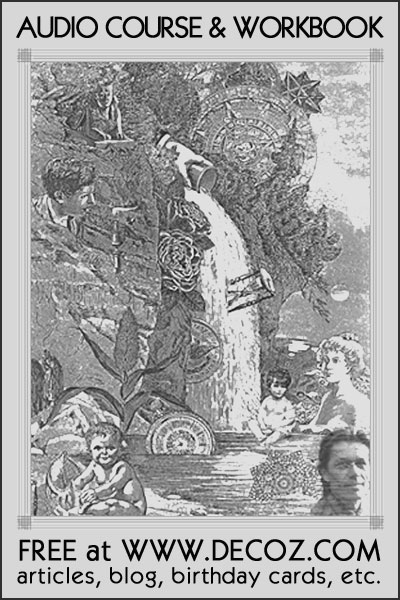 Probably the most common motivation is the desire to understand ones’ own true makeup and that of others, and the ability to gain some insight in what the future may hold.

Or perhaps someone is strongly drawn to anything relating to mathematics, including a “pseudo science” that assigns qualities to numbers as opposed to quantities. Another reason, less common in my experience, is that a strong drive to comprehend the purpose for even being here on planet Earth, alive and breathing and existing as a unique and separate entity, motivates one to branch into many different directions, be it religion or metaphysics or philosophy, and sometimes this includes Numerology; i.e. the true and genuine seeker exploring Numerology as perhaps one way to get some kind of grasp on this amazing miracle we call life.

To tell you the truth, I am not sure to which one of these groups I belong ... probably a mixture of all three. I have loved math since I was a kid, and I loved it for its strange and inscrutable logic, a logic I felt intuitively symbolized and reflected the mystery of life itself. And the desire to understand even a tiny bit of what it meant to be alive, what strange and beautiful power keeps this bundle of bones and flesh and cosmic dirt breathing and moving has captivated me for as long as I can remember.

I clearly recall roaming the streets of Amsterdam when I was perhaps 10 or 11 years old, looking at other people and being truly amazed that these folks were able to go about their ways without stopping every few steps to look up and around in astonishment, wondering with all their heart and mind at the fantastic adventure, the strangeness of this existence. How could they do this? And this desire to know that is far too often seen as the mother of all clichés, has been a conscious motivation behind many choices and decisions I have made in my life, including my dive into Numerology in the early 70s.

To what extent Numerology has helped me in my quest to find some answers, I can’t tell you. But I can tell you this: it has been a powerful weapon in my arsenal. Not because it made me understand more about my personal makeup, which it did, or because it gave me a bit of insight into what my future might hold, which it did as well, but because it very gently, very subtly, over many years, helped me gain some insight into the reality of life itself -- and I don’t mean the things that happen in life, but life as a force of energy that carries you forward with every breath. And yet, Numerology was only one tool, really more of a side dish that helped me find and devour the main course.

When I was 21, I decided to go on a walk-about in the vague hope I might discover the mystery behind ... well, everything, really. I hitchhiked my way through most of Europe, then on through Turkey, Iran, Afghanistan, Pakistan and India. Why many people, including yours truly, thought the answers could be found in the East I don’t know, perhaps some intuitive sense we all shared in those days -- this was 1970. Broke and no longer owning anything more than the clothes on my back after a few months of living on the beaches of Goa, I found myself living on the streets of Bombay, begging for food like everyone else, until I finally ended up living with dysentery under the Indian Gate monument in front of the Taj Mahal hotel in Bombay. I could not walk more than a few steps and had lost much of my body weight when an old man who also lived on the street started feeding me rice water every day for a week. There is no doubt in my mind that this old man saved my life. Once I was back on my feet I made my way to New Delhi. During those months I met many Saddhus, Gurus, Mahatmas, Holy Men, and others who had dedicated their lives to whatever their concept of God happened to be, after all, these were the people I was interested in. These were dedicated people genuinely devoted to their Gods and yet, once you got past the surface there seemed to be very little difference between the Guru in Benaris and the priest in Amsterdam; all words, beliefs, and concepts, but nothing real. Everyone showing pictures and talking about their idea of what a glass of water tastes like and none able to actually let you drink the water. And I realized that the only thing I knew without a trace of doubt is that if the energy, the power we call life, is to be experienced it must be where it exists, inside of me.

It is now a good 38 years later and only one thing has truly changed. As soon as I came back to Holland I left again a few weeks later, this time for London where I met a man, a young boy, actually, I had heard about in India who did only one thing for me: he taught me how to be very, very quiet and direct my focus inside to a place I had always known and never understood. So many detours, so many dead-end streets, and the answer was right there: right inside of me.

How does this relate to Numerology? It doesn’t, really. Except that the same simple logic that tells us that any number larger than 1 is nothing more than the number 1 added that many times is also the perfect symbolic expression for the simplicity of that which was in the beginning and will always be as it manifests itself with every breath you take in something as hugely complex and sophisticated as the bag of bones and flesh and cosmic dirt that is You.