Numerology and the Great Transition

1 Is Out - 2 Is in: Why The Millennial Change Is Important

Seventeen years ago, we ushered in the third millennium - one thousand years where every calendar year starts with a 2. Allow me to explain why this is important to each of us, and why, to this numerologist, it offers a message of peace and hope. 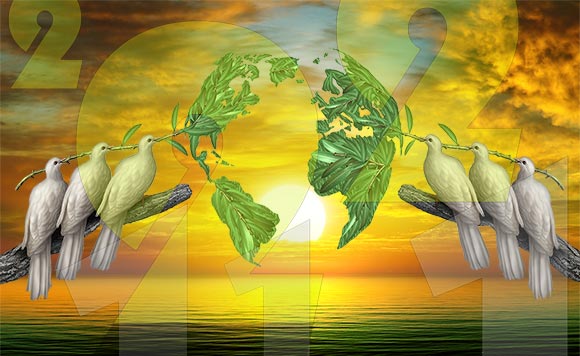 Your Personal Numerology – Against a global perspective

Your date of birth and your full name at birth form the basis of your personal numerology chart. Your full name tells us “who you are”. Think of it as your DNA, revealing the attributes and traits you brought with you as you came into the world.

The name you were given describes YOU. Your date of birth sets you in motion as you take your first step on a path influenced by an assortment of cycles that last anywhere from 9 days to 27 years.

The most important cycle in your numerology chart is the Life Path, which begins the moment you take your first breath and ends when you release your last. Your Life Path number is considered the most important number in your chart because it foretells your growth, your path, the direction of your life.

Your Life Path number is based on the number sequence found in your date of birth, a sequence that consists of six to eight digits. Keeping that in mind, let’s consider what happened when the clock jumped from 11:59 PM on December 31, 1999, to 12:00 AM, January 1, 2000.

For a thousand years, from December 31, 999 to December 31, 1999, every human born had at least one “1” in their date of birth, since each calendar year started with a 1. That left five to seven digits that were more or less evenly divided among the digits 0 to 9 (the 0 would appear if you were born on the 10th, 20th, or 30th day of the month or if you were born in October).

If you don't like math, feel free to skip this part and scroll down to "Enter the New Millenium."

Let’s look at numbers and patterns

We begin with a little shortcut. To say that the numbers 0 through 9 are evenly divided among the remaining digits in your date of birth is incorrect. There are 12 months, which means the numbers 1 and 2 appear more often than the other digits - i.e., four out of twelve months contain a 1, which means you have about a 30% chance of being born in a month with a 1 in it. The day of birth offers an even higher percentage of finding a 1 , as twelve of the 31 days of the month include the number 1.

Look at all those ones!

In short, people born in the previous millennium have a lot of 1’s in their birth date numerology. You can see your own birth numbers in the free chart calculator in the World Numerology App.

Although those born in the current millennium are still likely to have one or more 1’s in their day or month of birth, they are guaranteed to have at least one 2 in their year of birth; and more importantly, they have one less 1 in their date of birth compared to those born the previous millennium.

Why this is such good news

The meaning of the number 1 in numerology is individualism, independence, drive. It is confrontational, competitive, forceful, and uncompromising. The 1 is the warrior’s number, a bold, dynamic energy.

During the previous millennium – with the 1 dominant in all birth dates - our evolutionary development focused on the individual, pulling out the unique, and pushing the limits in all areas - science, art, technology, and even sports. We adored the pioneering individual and their accomplishments which helped us to make impressive advances in many areas.

On the downside, it created a dog-eat-dog world with little empathy for those who did not stand out, did not make a fortune or invent fast food, did not paint master pieces, did not become famous musicians or become a senator.

The same ruthless energy that drove us to make great progress also brought us numerous wars and an unrelenting state of discord.

The number 2 is the direct opposite of the 1.

The 2 is about sharing, brother/sisterhood, sensitivity, tact, diplomacy, and cooperation. It is the peacemaker, a gentle but resilient energy capable of feeling the hurts and hopes of others. The 2 seeks harmony - it is tolerant, sacrificing, and loving. The 2 doesn’t inhibit the freedom of an individual or limit their ability to express, create, or think outside the box, but it substantially minimizes an egocentric, competitive temperament.

The 2 wants to work together to create an environment that benefits all humanity.

On the downside, the 2 can be a liar, a cheat, and overly sensitive, making mountains out of molehills.

The transformation from one thousand-year period to the next doesn’t happen overnight and, like any transformation, is not entirely painless.

You can expect the 1 to create considerable trouble before relinquishing its dominant position. It will take time before the 2 has taken its rightful place and fully exerts its influence. Once it does, we will gradually see humanity grow stronger bonds between different peoples, countries, cultures, and even religions. We will become more tolerant, cooperative, and willing to share.

One of the more pronounced differences between the 1 and the 2 is that the former relates primarily to the mind. It is calculating, opinionated, and can be ruthless. The energy of the 2, in contrast, is motivated chiefly by the heart - feelings rule, and that alone will push humanity in a more positive direction.

We are approaching a time when the only way we will survive is to come together, globally. Humankind will be forced to act as one. Fortunately, that is precisely the nature of the 2 – it inspires us to get together to share the burden and the rewards.

Man-made climate change is pushing our planet to the brink of disaster while we are distracted by rampant consumerism. Technology is outpacing our spiritual development by leaps and bounds. Denying these facts won’t make them go away, nor will it help us. What will help, is to recognize that we are one and the same, that our fate is as closely tied as shipwrecked survivors in a life boat.

This period has all the markings of a poetic, magical time. If it were written as an epic adventure in a great novel, you wouldn’t be able to put it down. But we are the story, and the danger is real. Our world, our daily lives, need the peace-making 2 to dominate the future. Lo and behold, here it is – and none too soon.

For more info on your personal numbers, view your 3 free charts and mini-forecast in the World Numerology App (below).