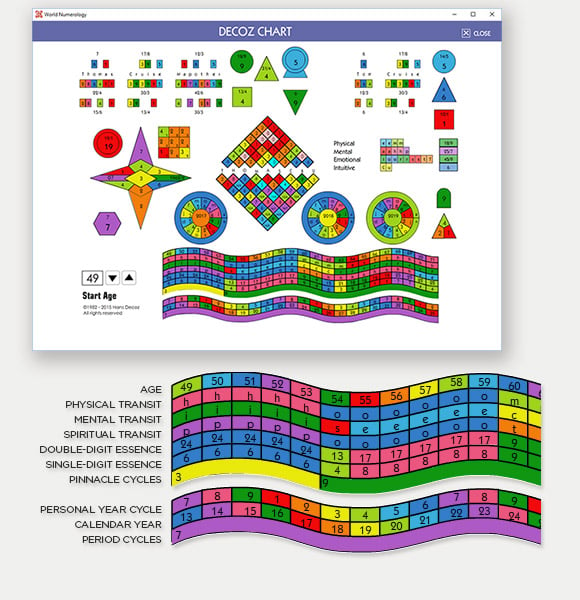 The Essence cycle number is the sum of the Physical, Mental, and Spiritual Transits in place during a particular year of your life.

The two bottom rows in the upper wave of the numerology chart are dedicated to the double-digit and single-digit Essence numbers. (Essence cycles are very important, so it is good practice to be aware of the double-digit number if there is one.)

The Essence cycles are shown on 5th and 6th row.

The 5th row shows the double-digit sum of the Transits; the 6th row the reduced single-digit total.

The Essence cycle is the sum of the Transit Cycles for that year.

The Essence Cycle also appears in the outer ring of the first “wagon wheel.”

The next two wagon wheels show the Essence cycles for next year and the year after that.

Notice that in the case of 2003, the year starts for Tom with a 4 Essence, and, after July (notice the mark at the July level) the Essence again is 4. It is quite common to repeat Transit and Essence cycles.