CRANKING UP THE VOLUME. 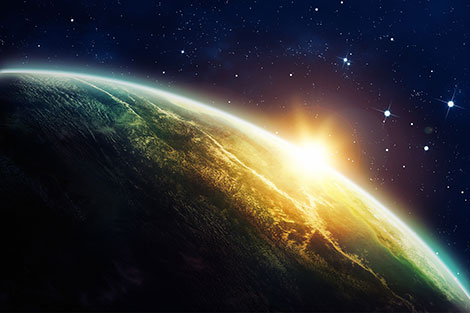 Welcome to 2017, a 1 Universal Year that promises major changes, increased energy across the board on a worldwide scale, and new directions for many of us, as countries reach out to each other or turn their backs on age-old alliances. This will be a year of technical breakthroughs and vast economic and political shifts. However, while those changes make all the noise and get all the attention, the most significant transformation will be an unprecedented rise in global awareness concerning idealistic and spiritual matters.

When you look back throughout world history, some years stand out as pivot points. This year, anno Domini 2017, will be such a pivot point.

During 2017 the 1 rules: a driven, forceful, confrontational, and often divisive number, the 1 can be a troublemaker like no other and there is no doubt we will see reflections of its often crude and insensitive attitude – not unlike a bull in a China shop. But when it comes to pushing for a new direction or making progress, there is no more powerful number than the 1. Pushing hard and fast is its most obvious quality, so hold on to your hat, we’re in for a ride. Especially, because this 1 is based on a high-octave 10, making it even more direct and uncompromising than a 1 based on 19, 28, or 37 – all of which are somewhat muted by the presence of other numbers.

This 1 Universal Year cycle is only the second cycle based on 10 since 1900, the first was 2008 and, as you may remember, it was a doozy. This coming year will be similar in many ways, but decidedly different in others – which is reflected in the hidden numbers behind 2008 and 2017. Whereas 2008’s singular hidden number was 6, which lived up to its reputation by causing considerable upheaval in the areas of family, protection, and community (mortgages, foreclosures, unemployment), the year 2017 encompasses several hidden numbers (1, 2, 3, 5, and 6). While this dilutes the effect of each, the dominant hidden number is 5 – the most chaotic and unrestrained of all. Pair a 1 with a 5 and maintaining control and order becomes a challenge. This suggests you can count on considerable chaos in the form of political, economic, and cultural changes across the globe, often happening overnight.

Confronting the status quo will be the order of the day in many parts of the world.

With a 6, a 3, and another 1 as secondary hidden numbers, this could be the start of something akin to a knowledge revolution as the 1 breaks everything open, the 3 turns it into noise, and the 6 shares and spreads it around. Imagine every database, every file, every classified secret, and pharmaceutical or technical invention hacked and placed on the Internet. On the upside, it boosts progress, on the downside, it opens the door to even more chaos and unrestrained greed. The spiritual plane, however, finds no downside to this influx of knowledge, shared equally and available to all. It only sees growth and wisdom on a personal, individual level.

In short, this is the first year of a nine-year cycle that, by exposing much that was kept in the dark, diminishes the power of the large (corporations, governments, religious institutions), and empowers the small (individuals, communities, grassroots activists). Although vastly different, the nine-year cycle starting in 2017 is not unlike the sixties, when the voices of individuals became loud and clear and people discovered their power and used it - when art, music, and philosophy experienced a renaissance that still echoes through our lives today, and when spirituality reached greater heights than ever.

How these changes affect you as an individual depends in large part on your personal cycles. Those with a 1, 4, 6, or 8 Personal Year cycle will generally be able to preserve some stability, as these numbers tend to stiffen your back and keep you grounded. However, while stronger and more rigid, these numbers don’t bend easily, so when the pressure becomes too much, they can snap. The odd numbers: 3, 5, 7, and 9, are somewhat more vulnerable; they are more easily affected but also quicker to adapt.

The gentle, sensitive 2 stands apart as it is the one most incompatible to the forceful 1 – they belong on opposite ends of the spectrum and share almost nothing. However, capable of diffusing confrontations and bringing unity instead of division, the loving, diplomatic 2 is the much-needed peacemaker, essential more than ever during the hard-charging reign of 1 and 5. If you are in a 2 Personal Year for 2017, you may need to be careful about when to pick your battles and when to walk away.

Looking from month to month, January and April 2017 will bring the greatest shifts. April, a 5 Universal Month in a 1 Universal Year, could be especially chaotic and unstable.

March will be a month causing unexpected movement in banking, as well as the military and law enforcement.

It is during May and June that we begin to see a transfer of the 1 and 5 energy from the large to the small, expressed through the voices of individuals, in the form of unique artistic and inventive breakthroughs, political change, and spiritual and idealistic transformations.

This is followed by a month of big market changes and a roller-coaster stock market. As the first 9 Universal Month in a 1 Universal Year, August represents the final closure of the previous nine-year cycle, a period that saw polarization as its main ingredient.

September and October signify an upward shifting of the gears as the 1 energy is no longer held in check by the remnants of the previous cycle.

November puts words and meanings in the spotlight as information becomes a cheap commodity, accessible to everyone. We have talked about “the information age” for decades, but it hasn’t really started yet. That distinction goes to 2017. This is nothing to be afraid of. On the contrary, unless you would rather hide in the dark then dance in the light, you should welcome it with excitement and an open mind.

Read Decoz' thoughts on: The Next Nine Years