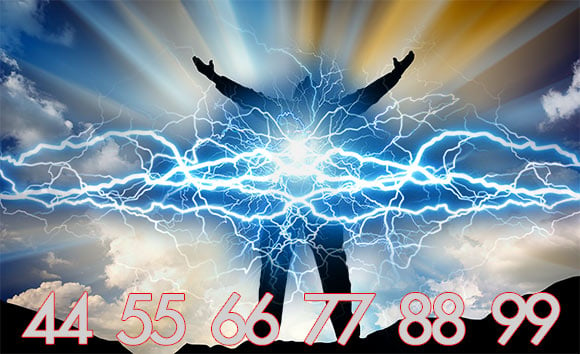 Aside from the Master numbers 11, 22, and 33, numerology recognizes Power numbers for their enhanced and sharply focused influence.

A numerologist always considers the double-digit numbers that form the basis of the single-digit numbers in your chart,  because they convey their own influence. For example, a 7 based on 34 (3+4=7) is more creative and efficient than a 7 based on 25 (2+5=7), which is more sensitive and unconventional.

However, among the double-digit numbers, those that are made up of two identical digits like 44, 55, 66, 77, 88, or 99, have a particularly strong and unique influence due to the fact that the attribute of each digit is multiplied.

Think of it as twin siblings with similar talents working together - their potential for success is greatly enhanced as a result of their combined effort.

In addition, the single digit that forms the foundation (44 = 8, 55 = 1, 66 = 3, etc.) tends to benefit as well. This is not a coincidence but one of the many examples of the beauty and harmony of numerology's rigorous calculation methods. There is nothing random about the fact that two fives (55) produce a 1, and that the qualities of the 5 have the potential to make that 1 disproportionally more powerful and effective.

Similarly, the doubled-up power of the extremely pragmatic 4 (methodical and focused) is the perfect foundation for a highly impressive 8 (results oriented, career/business focused).

Wondering if you have Power numbers in your numerology chart? Download our app and click the free Numerology Chart Calculator

Read the specific and unique influence of the Power numbers

The 4 and 8 (4+4 = 8) get along well and complement each other. The 8 is visionary, a goal-getter, result and business oriented, but it doesn’t waste time on details. The 4 is the most detail-oriented number of all - the organizer and manager. Together they make a formidable pair. If an 8 is based on 44, its potential for success is greatly enhanced.

The 1 is leadership, independence, individuality, and thinks outside the box. Pairing these qualities with the 5 - the most unconventional, adventurous, and freedom-loving number - is a perfect fit.

When a 1 is based on 55, it’s potential to break new ground, aim high, and lead us into unknown territory makes it a force to be reckoned with. The combination of drive and ambition inherent in the 55 are second to none.

The 3 is the most verbal of all numbers, but it has difficulty maintaining focus and shuns responsibility. Reliability is where the 6 shines. This is another example of a great pairing - the careless, creative 3 and the highly responsible, self-sacrificing 6.

A 3 based on 66 has the potential to produce a talented artist and inspiring human being.

This is one of my personal favorites: the serious, spiritual, introverted 7 as the base for the freedom-loving, unconventional, and intelligent 5. A marriage made in heaven.

The potential for a 5 based on 77 to reach the highest realms of original thought and spiritual realization is on par with that of the next power number (88), but for very different reasons. The 77 will gain these heights by ignoring the rules and thinking so far out of the box, its biggest challenge will be conveying its knowledge to others.

There is also a 14 Karmic number involved (7 + 7 produces the 14 Karmic Debt number), which adds another challenge – read more on that here…

Add 8 + 8, and you get the Karmic Debt number 16, the Fallen Tower, also called Phoenix rising. Adding 1 + 6 produces the most spiritual single digit number - the 7.

The 16 Karmic Debt number has produced more people of wisdom and sainthood than any other number. This is a particularly unique Power number. The 8 is the visionary, the 16 the Karmic seeker and searcher (often as a result of loss and loneliness), and the 7, the number of spiritual growth.

A 7 based on 88 is a number of great potential, but mainly in the spiritual realm. A 7 based on 88 that directs its attention toward worldly gain is a recipe for disaster.

The highest of all Power numbers, the 99 relates to global consciousness, tolerance, humanitarianism, and love for people worldwide.

The 99 reduces to 9 (after leapfrogging the 18). This unique combination includes the non-materialistic, self-sacrificing "mother Theresa" number (the 9), whose inherent qualities are greatly enhanced since it is based on a double 9.

It also has a significant dose of the pragmatic 8, the visionary and doer, as well as the ambitious leadership qualities of the 1. As a result, the 99 has the potential to be highly effective in making our world a better place.