For the past several years I have written yearly numerology forecasts with a focus on the extreme increase in polarization going back to 2008. 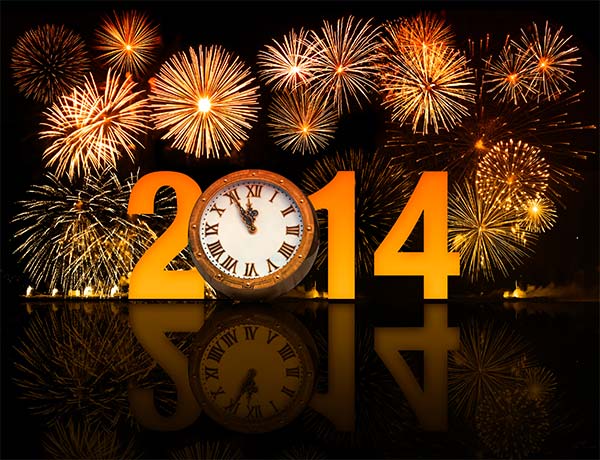 This schism affects the human race across the globe.

Whether political, social, economic or religious, our positions tend to be more and more black and white. Gray, the color of compromise, is no longer in vogue. Read any newspaper in any language and you will find this to be true. It 's a mirror reflection of the world we have created.

The polluted state of our land, air, and oceans reflects the moral and mental pollution that caused it. It shows the inevitable and devastating result of a lack of awareness. It's not so much a struggle of good versus evil, as it is of ignorance versus awareness. Global warming as a result of our irresponsible behavior continues to push the weather to extremes, and 2014 may well turn out to be one of the most catastrophic years in history, as the Earth and the sky react to the damage we have caused.

Polarization is the quintessence of a climaxing force delivered to us precisely on schedule by this nine-year cycle.

It's a natural, if difficult and painful, part of our evolution. As a species, we are young and immature, given to rebel and push the envelope. We have created an unsustainable environment, because we lack the consciousness to see beyond the desire for instant and superficial satisfaction that motivates us today. To say that we are short-sighted is an understatement.

It seems that in order to gain awareness, we must first experience an environment created by the lack of it. Those of us who will still be around fifty years from now, will look at this 2008 to 2016 period as a time of extremes; of a blindness that one day will be as unimaginable as the torture and cruelty of the Dark Ages is to us today.

But it will also be seen as a time of awakening; a time that brought to light the extraordinary love and sacrifice men and women are capable of.

The widening of the gap hides a deeper phenomenon - the growing presence of consciousness – the awareness of one's existence and its inseparable connection to all life. This too, I have referred to in previous forecasts.

We are in an epicycle of extremes on all levels, bar none. Darkness grows darker, light becomes lighter. Darkness is the lack of light, ignorance the lack of knowledge, hate is the absence of love. Hate and ignorance are one and the same, just as consciousness and love are indivisible.

Fortunately, there is a growing recognition that we must look within, to love, contentment, and understanding, if we are to find balance and harmony with the material world. In this time of blind ignorance, an awakening is taking place in the minds of thousands and thousands of people of all ages.

It isn't intrusive. For that reason, ignorance always gets the floor.

Ignorance has nothing to do with intelligence, or the lack thereof. There are many intellectuals who are ignorant. They may have great minds, but they lack consciousness and therefore feel little empathy and are willing to push extremist agendas.

2014 Is the year when we become more aware of the destructive nature and the inherent danger of a world of extremes. We will begin to see a trend through all areas of human life, to search for ways to bring us together. But it is still too early to see much change until 2017. There will be people in power who change overnight, and institutions that will reconsider their ideologies, giving us hope, but we will also see the negative forces become more desperate and violent.

Extremes continue to rule during the nine-year cycle, ending in 2017, after which we enter a nine-year cycle that is dominated by information. The 2017 through 2026 epicycle will see the end of many centuries of long-held secrets. No one will be able to hide, no institution will be able to hold onto its secrets. Light will shine on everything, symbolic of the most dramatic change in history.

But I'm getting ahead of myself.

It is analytical and self-examining. It starts a turnaround, as even the mind, cold as it is, recognizes that duality doesn't benefit anyone. But other numbers play a role too.

For the numerology enthusiasts: The numbers in the upper half of the graph below reveal the positive nuances of this 7 Universal Year and are found by continuously adding the digits in a pyramid-like system. The numbers in the lower half show the challenging, negative influences, and are the result of subtracting. They are therefore mirrors of each other. The strongest relationship any one number in this graph below has, is with its mirrored partner.

The 9 at the top represents compassion and empathy (it is called the Mother Theresa number for a reason), while the negative influence of its mirrored partner, the 1 at the bottom, reflect egotism and cruelty. The symbolism is obvious and appropriate. The 3 and the 6 in the upper half tells us that art and communication (3), and a deepening sense of responsibility (6) will be the primary channels through which the energy of the 9 flows, although the hostile 1 and the sly 2 oppose them.

The 5 represents a big change or shocking and unexpected event around October/November of 2014, caused in large part by miscommunication (the 3 below it). That's approximately the time for the U.S. election, and it will certainly affect it; but keep in mind that the influences are global, not focused on just one country.

The influence of the 2014 Universal year affects each of us differently, depending on our personal cycles, which are linked to our Sun Number.

Learn how the universal year cycle affects you the current year