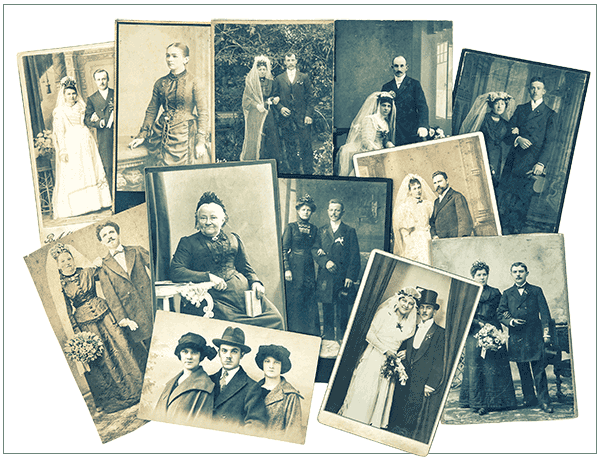 One of the 18 modules in our app, Ancestral Influences, analyzes your ancestors names and explains how they still affect you today.

You can also purchase a Family Tree Numerology report as a single report in pdf. Learn more...

Numerology is the study of patterns and cycles found in names and dates, and one such pattern concerns the continuing presence of a last name carried on from generation to generation.

LOOK AT ALL YOUR ANCESTORS LAST NAMES

In most Western cultures the surname is carried on from father to son or daughter and an in-depth analysis of this name can be quite revealing. However, the mother’s maiden name should also be looked at as that name reflects a similarly enlightening connection albeit with your maternal ancestors.

Your last name therefore reflects the result of centuries of collecting energies and influences from many sources.

Last names, your ancestor's names, are an important part of your personal numerology reading. They affect your Karmic Lesson and Hidden Passion charts, and are the sole influence of your Spiritual Transit, an important cycle reflecting your inner/spiritual growth.

Here is an example of an analysis of an ancestor's name.

(This is for a fictional person)

His Ancestor's last name we analyzed is McGovern - an ancestor on his mother's side.

ABOUT YOUR FAMILY TREE REPORT

Your personalized Ancestral Influences Report analyzes your given name at birth and the name of the ancestors you choose to explore. Last names are an important part of your Numerology chart. They add letters and numbers to your Karmic Lesson and Hidden Passion charts and are the sole influence of your Spiritual Transit. This Transit is an important cycle reflecting your inner/spiritual evolution and that of your forebears.

Your Ancestral Report provides a glimpse into characteristics you have inherited from those who came before you.

Numerology is an ancient system for studying patterns and cycles. One such pattern demonstrates the enduring influence of the last name carried from generation to generation.

A family name can remain unchanged since its origin. However, it sometimes loses or gains a letter or two or is altered entirely due to changing circumstances, such as immigration. These changes are reflected in your ancestor's evolutionary path. When their name changed, their lifestyle, environment and personality did as well. These traits are a component of your family's evolving ancestral "DNA" passed down through the years.

In most cultures, children adopt the last name of their father, and an in-depth analysis of this name can be quite revealing. However, to complete the ancestral picture, the mother's maiden name (on both sides of the family) is just as important.

Looking back through both branches of your lineage will help you detect which side of the family you resemble most closely, and which traits you share. In short, you are at the end of a long line of predecessors, having inherited a wide range of characteristics. Your name and the names of your ancestors reveal centuries of accumulated energies and influences that are part of your makeup today.

A name can be mined for sources of insight in a variety of ways. We consider the sum of the vowels, the sum of the consonants, and the sum of all letters combined. Additionally, each vowel and consonant is examined separately and in the order of appearance. Information is also gleaned from the absence of certain numbers as well as those appearing most frequently. The Spiritual Transit cycles provide valuable information as well. Every ancestor who carried your last name went through the same Spiritual Transit cycles during the same ages you did.

The custom of a woman assuming her husband's name has a considerable impact on her personality and experiences. In doing so, she quite literally surrenders part of her identity and inner/spiritual path.

This does not necessarily create discord and often affects the relationship positively. However, it is something to think about if you are contemplating marriage or divorce. Considering the effect, a name imparts, a divorced woman might consider reclaiming her maiden name to recoup the part of her identity forfeited during the marriage.

The decision to adopt a partner's name requires the same forethought for same sex marriages.

Let us move on to your reading.

SOURCES OF STRENGTH, SURVIVAL AND STAMINA

To understand your relationship to your ancestors, it is important to recognize that each aspect analyzed is focused on a specific facet of your ancestors' makeup. For example, in one chapter you might learn some of your ancestors likely lived on the darker fringes of society, while the next chapter suggests an innate desire for honor and justice motivated many of their choices.

While this appears to be a contradiction, it probably isn't. Think of it as the "Robin Hood syndrome" where thievery and honor occupy the same heart; we all possess contradictions in our personality and the approaches we take to various issues.

This chapter centers on the dominant source of strength that helped your ancestors survive and prosper.

The 2 ruled your ancestors' sources of strength, survival, and stamina

The name McGovern suggests many of your forerunners survived and progressed, in part, by outwitting their enemies through diplomacy or manipulation. They were probably less inclined to pick up weapons than to use their wits and finesse. Some may have resorted to lying or cheating to survive (a variant of the negotiating skills associated with this influence).

Your McGovern predecessors had strong, insightful intuition. While probably not the type of perception psychics depend on (although there may have been a few), they possessed an ability to accurately read the body language and facial expressions of others. This is a rare skill and should not be underrated.

This aspect describes what motivated your ancestors and what attracted and interested them.

The 6 reflects your ancestors' motivational drive

Many of your ancestors with the name McGovern may have been influential within their communities as healers, teachers, or protectors of the less fortunate. Their numbers tell us they often sacrificed to help others. Many may have chosen politics or were important within their communities as advisors and leaders. Some may have become high-level soldiers, perhaps even generals, as the motivation to climb social and career ladders came naturally to them.

The vowels in the name Colb indicate most of them preferred the role of defender over that of aggressor, freedom fighter over conquer, and liberator over oppressor.

The following chapter reveals what can best be described as your ancestors' fortitude - the ways they dealt with adversity, obstacles, illness, or poverty, or simply how they held fast against the tide of changing circumstances. These characteristics helped your ancestors overcome odds many could not and were a determining factor in the choices they made and lifestyles they adopted.

No matter which profession your ancestors chose, they generally had one thing in common; what they lacked in stability and common sense, they made up for in guts and glory. Clergy may have been deemed heretical at some point, and soldiers might have led a group of mutineers. This name suggests your McGovern ancestors were often obstinate and disagreeable. This trait was probably counterproductive at times but may have also provided the motivation to triumph over adversity.

A SHARED PASSION AMONG YOUR ANCESTORS

Alex, this section reveals a specific trait or dominant quality held by many of your predecessors. Although this report is built using the last name only, it reveals one area where a characteristic was likely shared almost universally among all with that surname, regardless of the first and middle names.

Your ancestors' shared passion was ruled by the letter "A"

Many of your ancestors were competitive, driven individuals. Some may have been quite aggressive.

This section reflects attributes or a mindset that likely attracted your ancestors to a particular profession. Although other variables in the chart may have altered these influences and lead them to different choices, they probably had some interest in the trades and professions mentioned below. Let's take a quick look at the key qualities and attributes reflected in your predecessors' last name.

Your ancestors' aptitude to certain careers and talents

This chapter looks at a probable weakness that was relatively common among your ancestors. It would have been necessary for them to overcome this shortcoming to be successful in life. Keep in mind that this is a negative influence, and not every predecessor was affected by it. This aspect is often diminished or completely eliminated if a first or middle name balances it.

The 1 represents your Ancestors ability to overcome weaknesses

This area of your chart suggests some of your McGovern ancestors were challenged by a lack of self-confidence, independence, or individuality. A few may have overcompensated by being aggressive or even violent. Others were just the opposite and perhaps seen as cowards.

The number in this position indicates it was often either one or the other. These ancestors had to develop the courage necessary to stand their ground and stay true to their beliefs. Most of your ancestors likely met this challenge, discovering confidence and overcoming the need to prove themselves through confrontation or aggression.

HOW YOU COMPARE WITH YOUR ANCESTORS

This chapter looks at your name's numerological traits compared to those of your ancestors with the surname McGovern. Your ancestral influence rating is divided into four categories: Very High (16 through 20 points), High (11 through 15 points), Average (6 through 10 points), and Low (1 through 5 points). The ancestral influence rating shows how closely your traits resemble those of your ancestors. These results are neither good nor bad, but simply another way to identify your 'genetic code' similarities to each ancestor.

Alex, your connection to this line of your ancestry is relatively high, but there is almost certainly another branch of your family tree where your personal traits match more closely. On a scale of 0 to 20, your compatibility rating is between 11 and 15.

While your personality may not be particularly similar to your McGovern ancestors, you did inherit some of their characteristics. Keep in mind this comparison is a small part of your makeup; your full name at birth and your date of birth hold much more weight and offer considerably more insight into who you are.