the rise of a brave new generation

I suppose it’s evolution 101; each generation an improvement over the previous one, each generation better attuned, adjusted to survive the challenges of the future. Darwinism at its finest.

Sometimes the adjustments are barely noticeable, other times a generation seems to make a big leap forward, calling for change and shaking up the status quo to the inevitable dismay of an establishment fearful of, well, pretty much everything. 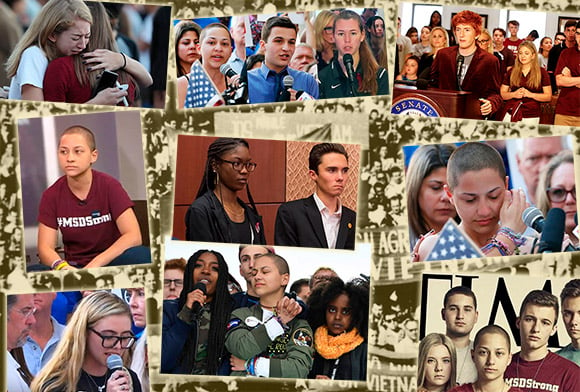 The sixties was such a time, when young people around the globe made themselves heard, calling for Peace, Love-Not-War, for Civil Rights, for tolerance and understanding.

It is now half a century later and once again we watch a young generation push for change. I, for one, am extremely grateful - it’s a beautiful thing to witness.

Kids barely old enough to vote are being interviewed on TV, and I am in awe of their sincerity, their intelligence, their dignity, and their empathy for others. I see the way they support and respect each other, their willingness to sacrifice, and their courage in the face of a harsh, merciless blowback from an establishment that knows no guilt and sees no truth.

These kids represent a great new generation - one for the history books. My admiration is off the charts and I am not ashamed to admit they are better than we were. This is not, however, entirely unexpected.

Around the turn of the century I wrote an article about the growing influence of the number 2, due to the fact that every child born in 2000 or later, would have at least one 2 in their date of birth. (During the thousand years prior to that, from 1000 to 1999, every child was born with at least one 1.) The addition of a 2 in the birthdate of every child born after the year 2000 is significant. The number 2 symbolizes empathy, tolerance, tact, cooperation, brother/sisterhood, peace. To use an analogy, it’s as if each of these children is given an additional teaspoon of empathy.

But I have to admit I underestimated the powerful influence of the 2. Watching the growing youth movement driven by compassion, respect for life, and anger at the appalling lack of progress on these issues, I am convinced this generation will launch us towards a new age - an age of tolerance, love, respect, equality. They are not the first to lead us in this direction, but they are definitely switching things into a higher gear.

For those of us who read the papers and watch the news, the future may look pretty dismal. Perhaps the rise of these kids is too little and too late to change the course we set hundreds of years ago - one of greed and selfishness that is inching us to the brink of disaster. Fortunately, evolution has a way of correcting life forms as needed – to help them survive the changing conditions. These kids are living proof of that.

I believe in this generation. I am impressed. I am in love. I am filled with hope. I know it will be a struggle, for survival no less. Our kids know that. They want to live, they want a better world, and they are willing to fight (and vote) for it.

Numerology and the Great Transition; 1 Is Out - 2 Is in: Why The Millennial Change Is Important