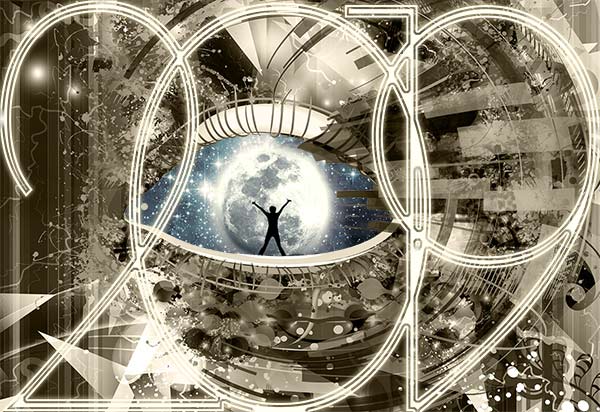 The essential message was, every child born starting with the year 2000 will bring with them a little more kindness, a little more love and empathy - as those are the traits of the 2. The 1 we leave behind was self-oriented and confrontational - the individualist and warrior we apparently needed to be during that millennium.

The change generated by the gradual replacement of 1 by 2, as previous generations pass on and those born since 2000 mature, is subtle and won’t be obvious for some time - but it is already affecting us in subtle, yet powerful ways. The statement ‘the children are the future’ has never been more applicable than it is today.

THE INFLUENCE OF THE MOST RECENT 9-YEAR CYCLES

In literally every Yearly Global Forecast I wrote between 2007 and 2016, I mention the increasing schism between left and right, religious and non-religious, wealthy and poor.... The numbers clearly point to the devastating shift we are experiencing now - a more polarized and volatile political and economic reality that is destabilizing our world.

Looking back, there is no single term that more accurately reflects that time (2007-2016) than polarity. The fabric of our global society has been stretched to its limits, bringing confusion and discomfort to almost everyone.

In my more recent forecasts (find them below), a different keyword took the limelight: Information Chaos. I’m not suggesting polarization is no longer an issue because it seems to be getting worse, not better.

But that polarization is overshadowed (and fueled) by the impact of information chaos - a tsunami of data that is a mixture of true and false, valuable and insignificant, visionary and shallow.

As we approach the third year in this 9-year cycle (2019 is a 3 Universal Year), the rumblings that drive this wave are barely heard. Even well into 2020, the damage to some/salvation to others this tsunami brings will not be fully understood. But once the pivotal 5 Universal Year (2021) approaches, we begin to realize there are no longer secrets, nothing remains hidden, false and accurate data mix and fuse until they can no longer be separated.

How it will come to pass, I don’t know. Perhaps quantum computers will break every encryption in less time than it takes to dial a phone number.

One thing I am sure of - the very foundation of what we perceive as our reality will crumble.

The good news? We will gain an immensely powerful tool: personal knowledge, and yes, consciousness, as more and more people recognize the value of seeking what can only be found internally. The dizzying explosion of intellectual and technological know-how of the last hundred years is obvious to all of us. The equally rapid increase of people who seek the realm of inner knowledge may be less obvious but is just as real.

The year 2019 is a pivotal year in its own right. Not as earth-shattering as 2021 (you’ll have to wait for that forecast), but definitely one for the history books. 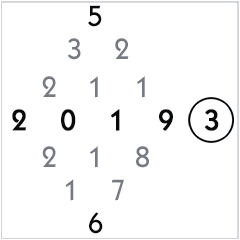 This chart shows the numbers that dominate 2019 - the most influential being the 3 Universal Year number (the sum of 2 + 0 + 1 + 9 = 12, which adds to 3). The 5 at the top is calculated by adding individual digits using the same pyramid-method we use for Pinnacle cycles. The 6 at the bottom is found through deduction using an inverted pyramid-method.

The numbers in grey play a secondary role and do not have as much impact as those shown in black, but their influence helps tell the story of what we can expect for this year.

When the 3 rules communication is key, but with a tendency to play fast and loose with fantasy vs reality. The 3 is creative and playful, but also irresponsible and superficial, like a child bending the world around it to be what it wants it to be.

On a personal level it is one of the more enjoyable numbers, often found among creative people, especially in the verbal and performance arts. But unless this energy is supported by more pragmatic, disciplined numbers it tends to scatter its energies, wasting its effort.

As a Universal Year number, the 3 tends to rock the boat; it has little respect for rules and regulations, doesn’t always think things through, and has little staying power. When the 3 steps in like a wild child shaking a tree to see what falls, there’s no telling who or what gets hit.

The coming year is likely to deliver a steady bombardment of revelations and surprises - some beneficial but much of it will not be so welcome. To stay with my analogy, this particular tree has some troublesome fruit.

When we look at the individual digits that form the foundation of this year’s 3 (2, 0, 1, and 9), we learn the cycle is largely driven by contrasting and conflicting numbers. (Numbers adjacent to each other carry opposite traits.) The bold and confrontational 1 is the polar opposite of 2 which is sensitive and cooperative. The 2 is the opposite of 3 and so on, thru the 8 being the opposite of 9, and the 9 having opposite characteristics of 1 as the cycle loops back. The 0 has no personality of its own but sharpens and enhances the attributes of any single digit it is linked to.

This year, the 0 increases the discordance brought by the individual digits that make up the number 2019.

As you can see, there is no harmony between the numbers that make up the coming calendar year – they all conflict. There is no glue to bind or soften the contrary forces, which means unpredictable events, friction, and instability should be anticipated. The global market is likely to be more volatile, and politics will be a free for all.

The good news is, when you shake a tree, although you may get hit on the head, it also drops ripe fruit, lightens the branches, and returns nutrients to the soil. The aforementioned friction will force us to re-align our priorities and adjust our goals, rethinking the destructive path we seem to be on.

The year 2019 will see the rise of heroines and heroes, wrongs righted, and solidarity and loyalty in all the right places. It is the status quo that will feel the brunt of this wild year.

The 5 represents freedom and chaos. Finding it at the top of the pyramid tells us we shouldn’t underestimate the changes that are coming our way, but also that those changes are necessary to move us forward to become what we aspire to be.

The 5 in this position is good news for anyone seeking positive change - and an additional source of concern for those who fear change and continue to cling to old ways.

The 6 at the bottom is a challenge number, meaning it will demand a certain response from us. It’s a vacuum that draws the attributes of the 6 out of us. That too is good news, because the 6 is the number of compassion, caring, loving, parenting, healing, and responsibility.

The 6 is as stable as the 5 is chaotic, and as devoted to a cause as the 3 is superficial.

The 6 is the protector, the number for family and small communities. Appearing at the bottom of the graph shows us what our focus will be drawn too and where the healing starts – through love and compassion.

Although the numbers in grey play a lesser role, there are occasional sequences that make one (if one happens to be a numerologist) sit up and pay attention. Take a look at the 9, 8, 7, 6 sequence within the rectangle. 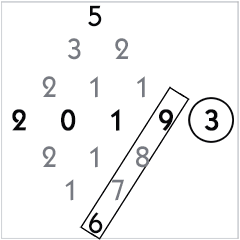 The 8 in this position tells us there is a karmic component to this year’s cycle. The 8 attempts to bring balance, to deliver just rewards for just efforts. This is good for some, not so great for others, as we reap what we sowed.

The 7 means there is also a strong spiritual draw seeking wisdom and spiritual awareness.

Finally, we find a 6 at the bottom; in short, this combines the power of justice and karma (the 8) with spiritual wisdom (the 7), delivering the healing power of the 6.

On a side note, 2019 is the only four-digit number capable of delivering the sequence 9, 8, 7, and 6, and there are only a few calendar years between 2000 and 2999 that produce a 6 at the bottom of any year’s graph, thereby symbolizing the essential, unique force of healing as an important ingredient in the coming year’s events.

The coming year will be painful and chaotic on many levels. The global economy is likely to be a roller-coastal ride where many lose their illusion of security. But we will also see an increase in people caring for others, of complacency replaced by action, of selfless sacrifice and acts of courage where we least expect it.

It will be a difficult year, but it is a year of promise, symbolized clearly in the 6, 7, 8, and 9 sequence of this year.

BACK TO A LARGER VIEW

We live in a time that is extraordinary to an extent none of us can fully grasp. I mean this literally. It is impossible for the imagination to comprehend. But I’ll give it my best shot…

According to one of my favorite TV shows, it all began with a Big Bang 14 billion years ago. Looking back, the time we live in now can also be seen as a Big Bang - an explosion of consciousness and knowledge.

To illustrate, I offer the graph below where every black dot is one million years. The last dot divides the most recent million years into ten-thousand-year sections, which is divided into hundred-year bites.

Take a moment to contemplate the enormity of being alive today, the incredible opportunity and the strange magic behind all of it. 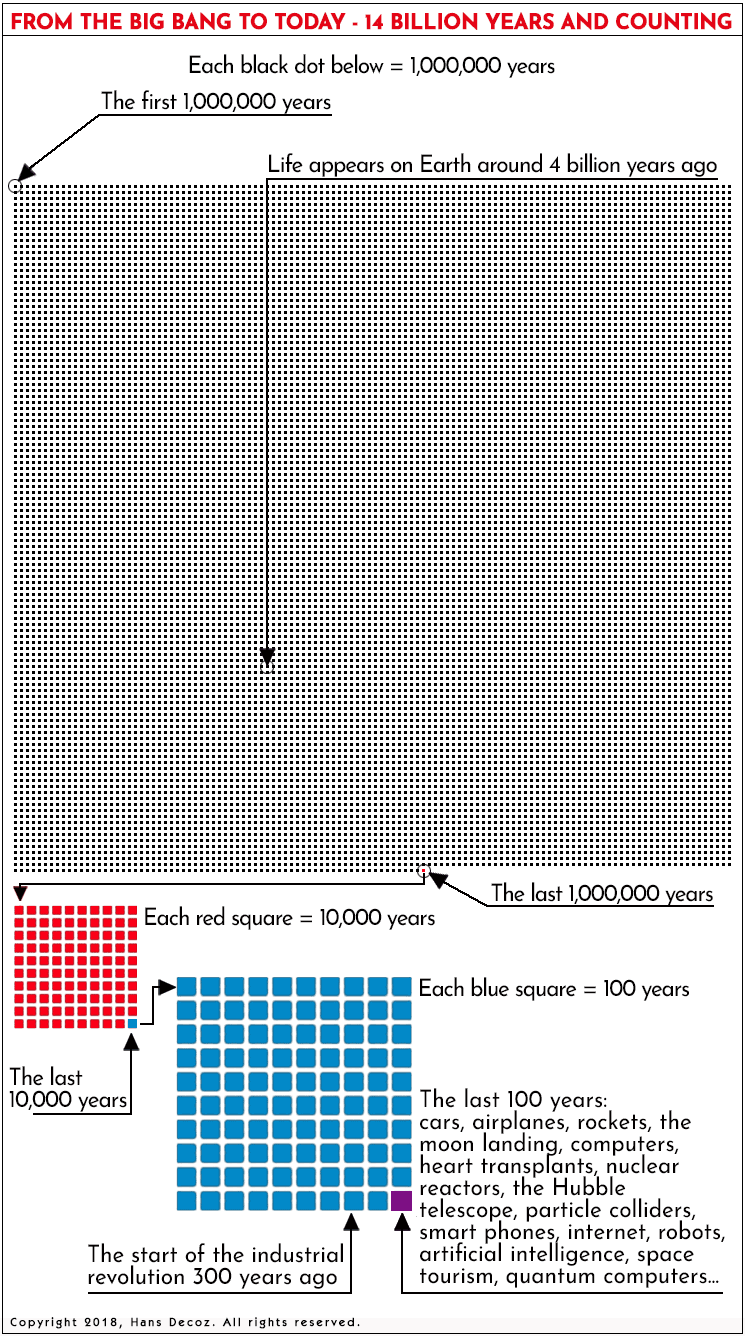 Look at those last few squares of time. We have grown exponentially - physically, mentally, spiritually, in knowledge and technology. This is not going to stop. We are on a bullet-train.

But we are also exploring our quest for inner awareness and connectivity. We have regressed at times, harming our planet and each other, but I am hopeful that at this point in our evolution, our individual and shared consciousness will propel us into a healthy, inclusive, peaceful future. As always, it’s up to each one of us.

HOW WILL THIS GLOBAL FORECAST AFFECT YOU?

Although the numbers in your personal yearly forecast have the most profound effect on the influences and energy you experience each year, the Global Forecast plays a role.

Just as the “energy” in your family, relationships, and work environment affect how you feel each day, your neighborhood, community, and global issues touch you as well. In 2020, the social and political polarity and “information chaos” impacting the world will be felt by each of us to varying degrees.