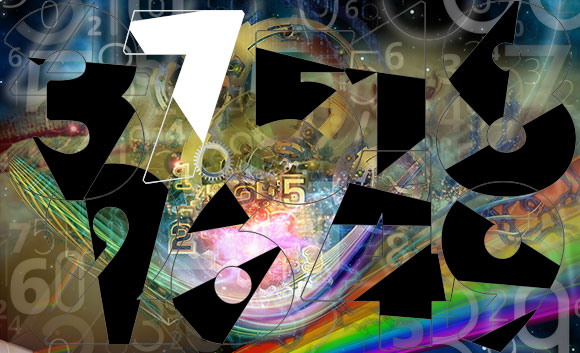 The 7 is the seeker, the thinker, the searcher of truth.

The Numerology Meaning of the Number 7: THE PHILOSOPHER

The 7 doesn't take anything at face value, and always strives to understand the hidden truth. The 7 knows nothing is exactly as it seems and reality is often hidden behind illusion.

A person who has a chart dominated by the 7 is easily picked out in a group.

They will be somewhat introverted, perhaps shy (not to be confused with low self-esteem), and never entirely comfortable in social settings.

The 7 is an intellectual, but their intellect isn’t always obvious, especially at an early age. (As a child, Einstein had dyslexia and wasn't a particularly bright student.)

The 7's intelligence appears in the form of a dreamer. They are intellectual explorers of the obscure and tend to have an off-beat perspective of the world around them. Many 7s are interested in the metaphysical, not because they are believers, but because it allows access to the abstract world of questions that have no clear answers.

The number 7 is spiritual but not religious.

The age-old questions surrounding what life is all about- why we are here, who we are, and so forth - are essential to the 7's life-experience. They don’t stop looking for the answers they seek until they die.

The number 7 can be aloof, hates gossip, and is immune to small-minded backstabbing. Money means little to the 7, and they will rarely make a decision based on an expected financial outcome.

There is a dry, usually misunderstood sense of humor to the 7, yet it is unable to recall jokes easily. A 7 individual is rarely cheerful and never superficial.

The 7 has excellent taste, along with a natural love and understanding of art.

They dislike or entirely ignore fashion, and popular beautiful-but-shallow people bore a 7 to no end. Rather, 7s are attracted to the eccentric. They are not always interested in politics but have a strong sense of justice.

A 7 doesn’t typically care about professional sports or other team activities. They are not warriors, but you may find some people who have the 7 dominating their charts in the military, most likely as analysts or strategic planners. More often, you will find them in the world of academics and science. Police detectives, laboratory researchers, and other careers where logic and methodical analysis are the main requirements fit 7s well.

On the negative side, the 7 can be cynical, verbally abusive, arrogant, and oblivious to the pain and suffering of others.

The 7 is opinionated and tends to know a bit about everything, which can be annoying to others. They are not always honest, often choosing a more "interesting" truth than the actual truth.

Many people are uncomfortable around 7s due to their penetrating eyes - creating the sense that, even when they seem to be listening, they're actually analyzing the shape of your face and the crevices of your earlobes.

They can be cold-hearted, cruel, and show a lack of empathy. Other peoples' problems simply don't interest them, but when it comes to their troubles, they expect everyone to feel for them. They can be selfish, anti-social, demanding patients, exasperating know-it-alls, and just plain rude.

The essence of the number 7 symbolizes our struggle to know and understand.

What’s unique about the 7 is that their mind is their greatest tool as well as their most significant limitation. Logical, flexible, and hungry for knowledge, the 7's mind goes places other numbers rarely approach. Their imagination is vast and powerful, which guides them into spiritual stratospheres others will never know. The 7 digs deep, but is always intellectual and rational.

The satisfaction they derive from mental exploration allows a 7 to enjoy many hours in solitude. At the same time, they put too much faith in the power of the mind; this can limit their ability to experience the essence of life, which can be known only through experience, not through thought or words.

The Tao Te Ching mentions, "Those who know do not speak. Those who speak do not know." Similarly, life in its purest form can only be felt and experienced, never defined. For 7s to reach a height of spiritual wisdom, they must travel beyond their mind's limitations and allow the inner silence to spill its secrets.