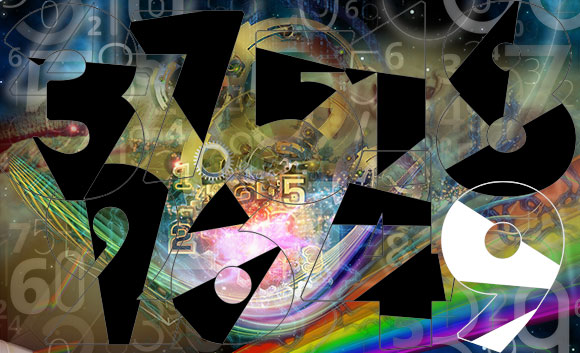 The 9 highlights a mathematical and philosophical observation that is unique and revealing.

The Numerology Meaning of the Number 9: GLOBAL AWARENESS

From a purely mathematical perspective, the 9 stands apart.

There is nothing coincidental about this peculiarity.

Try it. Any number, no matter how large, multiplied by 9 reduces to 9. From a numerological perspective, the 9 simply takes over, like the infamous body snatchers. Any number that was initially increased by a factor of 9 loses its own identity and instead takes on the characteristics of the 9.

No other number has that quality.

A different, but no less distinctive attribute of the 9 happens when you add it to any other number, then reduce that number to a single digit. In this case, it always comes back to itself as if nothing was added at all - it doesn’t change anything from the initial single digit value.

When multiplying, the 9 takes over, but when adding, the 9 does nothing.

For a math junkie like myself, this is beauty. It symbolically touches the core of the magic that underlies this creation. But enough about math, let's look at the personality of this unique number.

The highest of the cardinal numbers, the 9 is the most worldly and sophisticated of all.

The 9 has similarities with the 6 – including its shape (turned upside down). However, where the 6 is a symbol of love and compassion directed to people close to them (friends, family, the local community), the 9 offers love and care to the world at large.

The 9, more than any other number, has global consciousness - a reservoir of giving with a generous downward spout.

The 9 lives in the world and understands the connection between all people. Individuals with this number are humanitarians who see no difference between their next-door neighbor and people from different cultures on the other side of the world. The 9 is the least judgmental of all numbers, the most tolerant and the most conscious.

The 9 is overwhelmingly loving and empathetic.

People often regard those with a strong 9 as majestic, graceful, and elevated, but closely connected with the rest of humankind. At the same time, they can be hard to reach, seem aloof, and tend to float above the small-minded issues that can be upsetting to others. People either love or loathe 9 individuals, but find it difficult to deny the respect they demand. 9s have impeccable taste, are talented, creative, and usually quite eloquent when they express themselves.

The 9 is called the "Mother Theresa" number because it doesn’t hesitate to rectify abuse. More importantly, it does not seek credit for giving assistance. Just as the number 9 added to another number does not force its way into the sum (the sum stays the same) – 9 individuals never force themselves upon others when trying to help.

When circumstances require, 9s can be a powerful force, strong enough to take over and bend others to their will (just as the number 9 does when used to multiply any other number, where it takes control). However, the 9 is not a leader in the same way the 1 and the 8 are; its influence comes from the higher realms of philosophy and justice. A 9 does not use force or cunning, they just change your mind!

Although they are generally selfless, a 9 is often prosperous. This contradiction helps illustrate the true nature of the 9. Where an 8 becomes financially successful by focusing on the potential reward from an undertaking, 9s earn financial reward by utterly ignoring the monetary potential of an endeavor, the exact opposite of the 8.

As for matters of the heart, the 9 is not particularly romantic.

The 9 can be a difficult romantic partner, not only because they are demanding, but because you never know to what extent you’ve managed to reach them emotionally. 9s tend to hide their hearts, so even after knowing them for many years, the connection can still seem a bit distant.

They are loyal friends but will not allow themselves to become vulnerable. The most telling attribute of the 9 is the always subtle, difficult to pinpoint feeling there is more to them than meets the eye. They carry depth and intuition, and are at all times aware of their surroundings, like a person with over-developed peripheral vision.

As with any number, the 9 has a dark side.

A 9 can be condescending, arrogant, cold, and apathetic towards the suffering of others. When the 9 shows its dark side, it is egotistic, cruel, immoral, and completely untouchable. Unfortunately, it is easy for a 9 to fall into the dark side. For example, if they perceive themselves to be the victim of an injustice, they can turn vindictive, unforgiving, and malicious.

When the 9 appears as a cycle, it often denotes a finality, the completion of an era.

The 9 as a cycle is frequently seen as an indicator of death. This is simplistic and incorrect. When you are in the 9th period of a cycle (such as the 9th year of a 9-year cycle), it suggests you are in the final stages of that period or endeavor. It’s a time to empty your bucket and prepare for change, let go of the past, wrap up loose ends, and make way for new opportunities.