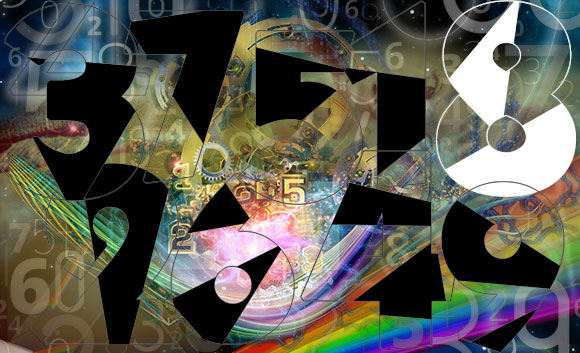 The most misunderstood number in numerology.

The Numerology Meaning of the Number 8: BALANCE & POWER

In Numerology, both novices and professionals alike tend to focus on the "money and power" image of the 8. Often when a client requests a name change consultation, it’s because they want to add 8s to their chart with the mistaken belief it will bring them money and power.

It is true that the 8, more than any other number, emphasizes the areas of career, business, finances, and authority.

As with other single-digit numbers, the shape reflects its most important attribute; in the case of the 8 it signifies balance. The 8 is the great Karmic Equalizer, a force that creates just as efficiently as it destroys. When the 8 comes knocking, you can be assured you will reap what you've sown.

The 8 creates a balance between the material and spiritual worlds.

At its best, it is as spiritual as it is materialistic. The sacred side of the 8 is practical, rational, and intelligent. It knows the difference between make-believe and genuine realization.

On the material plane, it is focused on results - often in the form of money - yet it doesn’t care about acquiring wealth merely for the sake of being wealthy. It is not greedy; it sees money as a tool not an end-result. It is generous and willing to take risks.

People with strong 8s in their charts often make and lose fortunes more than once during their life.

The 8 doesn’t consider bankruptcy a reason to slow down or feel sorry for themselves – and they usually come out stronger and more success-oriented than before.

Some of the more recognizable traits of the 8 are drive, ambition, authority, efficiency, organization, management, discipline, and control. Individuals with the 8 in their core numbers are goal-oriented, focused, have good judgment, are discriminate, and practical. In short, the 8 is a realist.

Its closest relative is the 1, as both numbers are powerful, have strong leadership skills, and will not shy away from confrontation. While the 1 lacks diplomatic skills and an understanding of human nature (typical traits of the 2), the 8 does exhibit those abilities. This is perhaps the principal reason why the 8 tends to do well in business and authority roles - the military and law enforcement also attract many 8s.

When the 8 appears in your personality profile chart, it indicates the presence of the character traits mentioned earlier as well as the potential to be successful and prosperous. Hence, the reason so many people hope to manipulate their charts by adding one or more 8s.

While the 8 carries enticing gifts, its energy needs to be supported by other numbers for it to flourish. The 4 helps keep an eye on the all-important details, and the 9 keeps the 8 in touch with their humanity.

Be careful what you ask for.

If you decide to change your name to add one or more 8s to your profile, the rest of your chart must be able to support this strong force. If the 8 is out of balance, you may inherit more of its negative attributes, like frustration, dissatisfaction, anger, aggression, greed, intolerance, hate… and insomnia.

A higher-than-average percentage of 8s find their way into the top echelons of society, but you will also find a disproportionate number of 8s among the homeless.

If the 8 appears in your cycles - especially your Essence cycle - it carries an increase in energy and focus, a newfound sense of motivation, and enhanced self-confidence. The shape of the 8 shows balance, but it also reveals confidence, as it looks you right in the eye. A constructive 8 is honest to a fault, generous, and forgiving. They can be physically imposing or athletic and tend to excel in sports requiring strength and endurance.

Most 8s are not particularly romantic in the traditional sense, as they prefer a more practical and straight-forward approach. Still, they are loving and more than carry their weight in relationships.

As with all single-digit numbers, the 8 has a positive and a negative side.

One mystery of Numerology is that there is a small number of people who, from an early age on and for no discernible reason, seem to turn the opposite direction of what their charts indicate. “Seem” is the keyword here. This phenomenon is found with all numbers, but it appears to affect 8s more than others. There are quite a few people whose charts are dominated by 8s that become priests, missionaries, humanitarians, and so forth. However, even those selfless, loving individuals tend to be skilled in fundraising, money management, and authority.