Do you have a question about numerology? Use this form to ask Numerologist Hans Decoz.

Birth data details are removed to ensure your privacy. We generally include the first name and month of birth only.

My life has been terrible for over 12 years. I have been through things one person should never have to go through and I am at the giving up point. Can you tell me anything that may help me to have a smoother and happier life.

My d.o.b. 07/... name is Robyn... I have had terrible legal and financial issues, and relationship issues.

I come from a broken home and life and now want to be the best I can be for my kids. Please can anyone help?

I am sorry to hear you have experienced so much pain and trouble for the last dozen years. I drew up your chart, shown here, to gain insight into the reasons and what you can do to change your life experience. 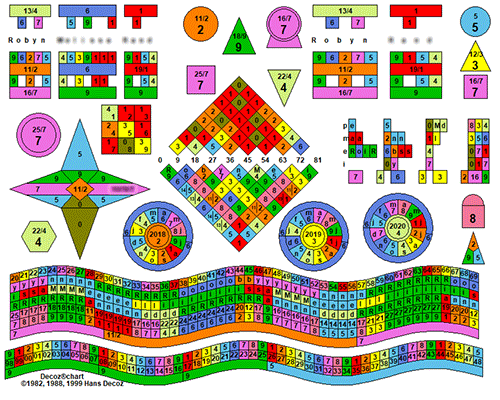 The most powerful tool we have to improve our lives is understanding. If you have a clear and realistic perspective on who you are, you are in control and you can then make the kind of choices and decisions needed to transform your life. Without clarity making changes is simply a crapshoot, and your life has an equal chance of turning for the worse as it does turning for the better.

The core numbers in your chart are mostly odd numbers, which makes you more of a dreamer than a practical doer. Your Life Path and Personality are both 7, your Heart's Desire is an 11, your Expression a 9, and your Birth Day number another 11. Also important is your 16 Maturity number, but more about that later.

What the arrangement of your core numbers tells me, is that your childhood was far from easy, as you probably suffered from bullying and a sense of not belonging - many people with a 7 Personality go through that - and that it affected you more than most going through similar childhoods due to your overly sensitive 11 Heart's Desire. No doubt you cried yourself to sleep many, many times when you were young. Particularly difficult were the years 12 through 14 when a 2 Essence and 6 Physical Transit caused an additional burden of being uncomfortable with yourself not only on an Emotional level, but also on a physical level.

Looking at the cycles for the last dozen years, I noticed that your Transits during the years '98 and '99 were 7 and 9 (twice). This represents loss, not just on the material/physical plane, which is very possible as well, but more importantly on the spiritual plane. A loss of faith, not in the religious context but in the context of the self - a loss of faith in yourself - a particularly devastating experience for a person with several 7's. Even more troubling, however, is your 19/1 Essence from '07 to about the middle of 2011, with particular emphasis on 2008, during which you also had a 1 Personal Year cycle; a duality of 1 almost always causes a lot of stress and demand; added burdens, a lack of control, and the frustration of feeling that everything around you is moving at twice your speed pulling and pushing you every which way; a time when you are forced to make changes with little control over the outcome.

As for your legal troubles, the 17/8 Essence during the years 2000 through 2003 shows that you took advise from the wrong people. And this brings me to the real reason your life has been so difficult for more than a decade. Perhaps your most challenging weakness is a tendency to surround yourself with (and rely on) the wrong people. This is due to the fact that you underestimate yourself, something you have done since birth but has increased dramatically after, as I mentioned previously, you lost faith in yourself in the late nineties. As anyone who has lost self esteem, you surround yourself with people who are not good for you.

There are several things you can do to immediately improve your life. Stop being a victim. Look at the people who are part of your life and consciously and rationally decide if they are good for you and have a positive influence on your life, and which don't. Those that don't need to be cut out of your life without hesitation and without any sense of regret or guilt. Take control. Do not consider which of them you "like." It is the nature of the beast that those who surround themselves with the wrong people always "like" them. What you like is the fact that such an individual comforts your sense that it is not your fault that you are in the predicament you are in. They are a comfort zone, not unlike those big soft pillows create a comfort zone for a couch potato. Truth is, you have been picking friends and acquaintances motivated more by a need to escape and slide into an illusion of security, than in search of true companionship, personal growth, shared interests, and so forth.

The time to cut the deadwood out of your life is now. In about 8 months your cycles change and the combination 4 and 8 (Personal Year and Essence respectively) comes into place, a blend that has the effect of enforcing your sense of self and increasing your personal power. However, this is followed by a 16/7 Essence for a period of two years (age 34 and 35), the same time your 16 Maturity number also comes into play.

There is no doubt that you will experience huge changes during those two years. These changes can't be avoided, however, what you can control is who will be at the wheel when those changes take place. And this is at the center of my message. You must take control now. You must remove as many bad influences as you can. Not just the people I already mentioned, but also other influences. You have to make the kind of lifestyle changes that bring light, joy, confidence, and gratitude into your life, as opposed to anger, frustration, etc. When you take an honest look at yourself, you will know exactly what I am talking about.

In case you are worried about the years when, as I expect, major changes happen due to the emergence of the 16, when you are 34 and 35, don't be. The fact that you have a 22 Essence for two years after that, followed by a long period of the stable and harmonious 6, tells me you will come out just fine. In fact, you appear to be sitting pretty solid in the saddle after that.