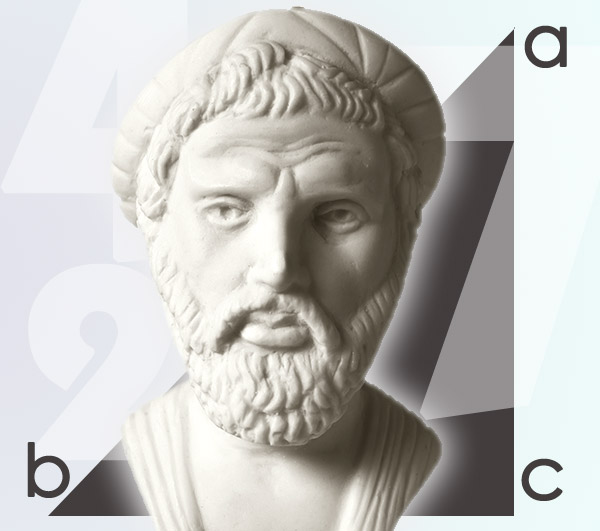 Pythagorean numerology was organized by Greek philosopher and mathematician Pythagoras

He combined the mathematical disciplines of the Arabic, Druid, Phoenician, Egyptian, and Essene sciences. Since then, it has continued to evolve. If formed the spiritual basis for many secret societies, such as the Rosicrucians, Free Masons, Anthroposophists, and others.

Pythagoras was born on Samos, an island off the coast of Turkey. He lived from circa 570 to 495 BC.

Somewhere around age 40, he moved to Croton, in the Southern part of Italy. However, prior to moving to Croton, he is thought to have traveled extensively and studied in Greece, Egypt, and other places in the Middle East, perhaps as far as Persia.

Pherecydes of Syros may have been one of his teachers, as were Nicomachus, and perhaps Thales of Miletus. (Some alchemical theories were closely related to numerology. For example, Persian alchemist Jabir ibn Hayyan framed his experiments in an elaborate numerology based on the names of substances in the Arabic language.)

In Croton, Pythagoras founded a school, which became so acclaimed that learned people from far away traveled to hear him and to listen to his discourses.

In or around 510 BC, the school was attacked set afire by his enemies, many Pythagoreans perished, including Pythagoras, who, at that time was around a hundred years old.

Numerology is a popular plot device in fiction. Sometimes it is a casual element used for comic effect, such as in an episode titled "The Séance" of the 1950s TV sitcom I Love Lucy, where Lucy dabbles in numerology.

Sometimes it is a central motif of the storyline, such as the movie π, in which the protagonist meets a numerologist searching for hidden numerical patterns in the Torah; the TV show Touch which focuses almost entirely on the role of numerology in the events and coincidences of any person's life; and the movie The Number 23, based on claimed mysteries of the number 23 (itself based on the Law of Fives).

There are many other examples of numerology playing a role in books, films, plays, and even music - especially Mozart.

The History of Numerology

St. Augustine of Hippo (A.D. 354–430), wrote "Numbers are the Universal language offered by the deity to humans as confirmation of the truth." Similar to Pythagoras, he too believed that everything had numerical relationships and it was up to the mind to seek and investigate the secrets of these relationships or have them revealed by divine grace.

Numerology had not found favor with the Christian authority of the day and was assigned to the field of unapproved beliefs along with astrology and other forms of divination and "magic". Despite this religious purging, the spiritual significance assigned to the heretofore "sacred" numbers had not disappeared; several numbers, such as the "Jesus number" have been commented and analyzed by Dorotheus of Gaza and numerology still is used at least in conservative Greek Orthodox circles.

However, despite the church's resistance to numerology, there have been arguments made for the presence of numerology in the Bible and religious architecture. For example, the numbers 3 and 7 hold strong spiritual meaning in the Bible. 7 is the length of famine and other God-imposed events and is sometimes followed by the number 8 as a symbol of change.

Numerology is prominent in Sir Thomas Browne's 1658 literary Discourse The Garden of Cyrus. Throughout its pages the author attempts to demonstrate that the number five and the related Quincunx pattern can be found throughout the arts, in design, and in nature – particularly botany.

There are several different styles of numerology, including Chinese, Vedic, and Chaldean.