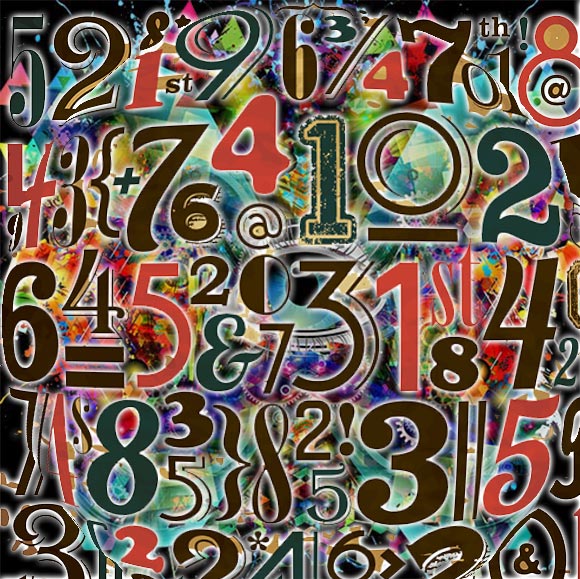 When we confront the question of numerology we are facing the same dilemma that we all face with the larger questions of life: Is there meaning and order to life, or is it purely a random and chaotic universe?

Randomness is a state in which there is no order or larger meaning. Such a state of affairs would mean that the universe is ruled by chance events, and there are no orderly laws governing the universe.

In fact, we know this premise to be untrue, since the natural sciences, such as physics, mathematics; biology, chemistry, and astronomy are all based on the orderliness, even predictability, of natural law.

Moreover, if the universe were ruled by unpredictable events, there would be no sustainable structure to it. On the contrary, the universe not only maintains form and structure, it also changes in precise and orderly ways.

When we look at the very basics of life—the world of deoxyribonucleic acid (DNA), the molecular world, and the developing child—we see an awesome sequence unfolding.

DNA is of such profound orderliness that it has been the template for producing literally billions upon billions of human beings with the same universal characteristics, two eyes, ten fingers, ten toes, et cetera. That no two sets of eyes are alike only shows the remarkable creativity and energy that are contained within this DNA molecule.

The gestation and birth of a child are also examples of remarkable orderliness: It still takes egg and sperm to produce an ovum, and nine months for a child to fully develop and to be born.

The growth pattern of humans has remained essentially the same too: We are born very young, and grow through adolescence, puberty, adulthood, maturity, and old age, at which point we die. The arc of life is consistent and stable. This has been happening for about 2 million years, the length of time humans have inhabited the planet.

Yet, all of us experience events that we perceive as arbitrary or random.

How can we reconcile the awareness that beneath our feet and above our heads—indeed, our very bodies—are the products of profound orderliness, while our lives seem permeated by random events of which we can make no sense?

We seem forced to say that, at first glance, both order and randomness exist simultaneously. But wait—doesn’t our perception of how much order there is in the universe constantly grow as we learn more?

For example, only three decades ago, heart disease and cancer were regarded by most of us as random and terrible events in life. Today we believe that these illnesses are of the result of our daily behavior and eating pattern. Both illnesses have very logical etiologies. Consequently, they are the products of order. The illnesses have not changed; only our understanding of them has.

Our growing understanding of order also changes the way we experience space and time. We all have had experiences that we cannot explain that fall in to the category of synchronicity or extrasensory perception. These experiences violate our normal perception of space and time. We think of these things as out-of-the-ordinary, but they are really glimpses of the underlying order that our rational minds cannot comprehend, and that we perhaps were not designed to understand.

As quantum physicist F. Capra points out in his book The Tao of physics, scientists have now discovered a universal unity among all phenomena. As Capra said, the universe is characterized by the "fundamental interdependence" between all phenomena.

And quantum physicist Niels Bohr emphasized that the main consequence of these theories is that we cannot separate any part of the material universe from the rest without making an error. The new vision of reality is a spiritual vision in its very essence.

Progress for the human spirit, as I've come to see it, is an elevation of consciousness to where the individual becomes fully aware of being an integral part of the cosmos as a whole, and of its maker.

This mode of consciousness is much, much broader than anything that could possibly develop from a rational thought process. Contrary to the knowledge of the mind, this understanding is rooted in seeing, recognizing, and realizing at a much deeper level, It typically occurs in meditative experiences, but it can also occur in many other settings.

Science is trying to reach that kind of understanding.

As Capra indicated, quantum mechanics is demonstrating that the fundamental reality of the universe-while not immediately apparent to our rational minds-is a vast unity in which all things are related.

In ancient times, this understanding formed the basis for all the natural and spiritual sciences. In fact, natural Science was merely the tool that was used to discover the underlying orderliness of the universe, otherwise Known as God, Out of this consciousness came such spiritual sciences as numerology.

Numerology is based upon this underlying unity.

A unity that manifests itself in a very intimate way in all of our lives. Our names and dates of birth, for example, are connected with our deepest inner being in a way that the rational mind cannot immediately understand. The intuitive mind, however, is capable of perceiving these relationships, and of interpreting them to help us better understand our lives.

The act of giving something a name is not a superficial or intellectual effort, but a reflection of our deep experience of the essence of the thing we are naming. It comes out of our connection, or our intuitive feeling of that thing.

For example, the word storm, with its special combination of vowels and consonants, gives us a feeling of the movement and power of an invisible force. Storm. Say it and you will feel it.

Another example is the word power, which names something, but at the same time gives the experience of the thing we are naming: Power! The biting movement of the jaw makes us feel it.

The word love embraces you gently, It gives you the experience of its meaning.

Every word, in every language, perfectly reflects the feeling and spirit of the thing that is named by the people who use that language.

Some will argue that the words used to name things were originally chosen arbitrarily, and then were integrated into our inner feelings. However, our understanding of sound comes from an archetypal and unconscious part of our being. It is intimately connected with our appreciation of music; no matter whether you are tone deaf or have perfect pitch, all of us have an inborn capacity to discern music from chaotic noise, Music is harmony. And music is inside of us.

Nature, too, is filled with events that have trained us to associate certain qualities with sounds: The clap of thunder, the woosh of a river, or the whir of a bird in flight.

From our innate understanding of music and harmony comes the act of naming thing according to our perception of their inner natures. This intuitive act is the source of language. All languages emerge from, and represent the nature of the people who use them.

All of this points to a single and incredibly significant fact: sound and time are both rooted in harmony and universal order.

This is the source of numerology. The numerologist maintains that each of us carries the perfect name that reflects our inner nature or being. That name is collection of sounds, a melody, that in a very deep and perfect way is you.