the Planes of Expression 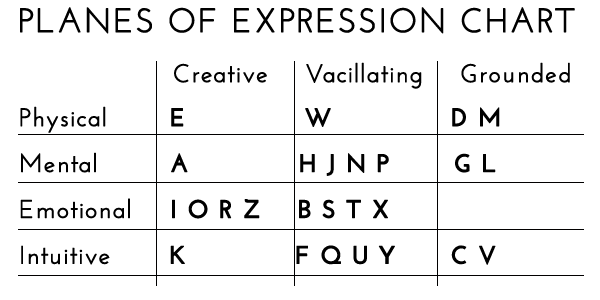 This is NOT based on their numerical value but on their traits and characteristics.

This table shows their status according to these categories

You may notice that not a single letter in the alphabet is both grounded and emotional. No vowels are grounded; all are creative with the exception of the U, which is vacillating.

The proportion of each category in your name gives a good indication of which attributes in your Numerology Planes of Expression chart are strongest and which are weaker.

The sum (reduced to a single digit or Master number) of the numbers found on each plane reveals how you deal with your experiences on that plane.

The chart below shows Tom Cruise Planes of Expression

Starting at the top, we notice the letter E appears twice; with a value of 5 each, they add to 10 which reduces to 1. He does not have a W in his name, so there are no vacillating physical letters, hence the number 0 in olive green.

But he does have the letter M twice in his name, including once as an initial (shown as a capital M). The letter M has a value of 4. Together they add to 8. See the 8 to the right of the letters M.

Next to the 8 you see a 4. This tells you that there are 4 Physical letters in his name.

And finally, the last number in the top row is a 9, telling us that the sum of all the Physical letters in his name is 9.

The fifth row is different; it shows the sum of the letters in the columns above it. Remember, the chart lists the Physical, Mental, Emotional, and Intuitive letters on each row, but it also reveals the Grounded, Vacillating, and Creative letters in the vertical sections.

The 8 means that there are eight vacillating letters, and the 5 next to that represents the reduced numerology value of those 8 letters.

Next to the 5 we find a 3, because there are 3 creative letters adding to a total numerology value of 11, reduces to 2.

Next to the 2 we find the number 20, telling us that Tom has a total of 20 letters in his name.

And in the furthest right bottom corner we find a 4. This 4 reflects the reduced value of the sum of all the letters in Tom’s full name at birth, and should therefore always be the same as the Expression number.

THE MEANING OF THE PLANES OF EXPRESSION CHART

Each of us experiences life on four different levels: with our physical body; our mental faculty; our emotional makeup; and our intuition. Each of these areas has a specific means of perceiving information.

The physical body is capable of touch, taste, pleasure, and pain. It provides us with a sense of the physical world.

The mental body, like the emotional and intuitive natures, perceives the invisible worlds. Our minds deal with the world of thought.

The heart, of course, is preoccupied exclusively with the world of emotion. Our feelings teach us many things about ourselves and about others.

Finally, we have the capacity for direct contact with the higher realms by way of intuition. Intuitive insight comes in a flash. It is not rational - that is the world of the mental plane - but comes as if it were placed at the doorstep of our minds. Intuition, therefore, bypasses all effort save that of perception.

These four faculties exist in all of us. But each of us depends more on one or two of them for the bulk of our knowledge. Some of us are possessed by our senses, while others live almost exclusively in our hearts, or minds. Numerology indicates how we as individuals function on each plane.

The Planes of Expression are part of your Personality Profile. Get it as a single report in Pdf - mailed to your inbox within minutes - or download our app (see below) and get a subscription.