There are two kinds of Lucky Numbers

Lucky Numbers based on your cycles are particularly important.

The World Numerology app uses specific and proprietary algorithms to identify those numbers. 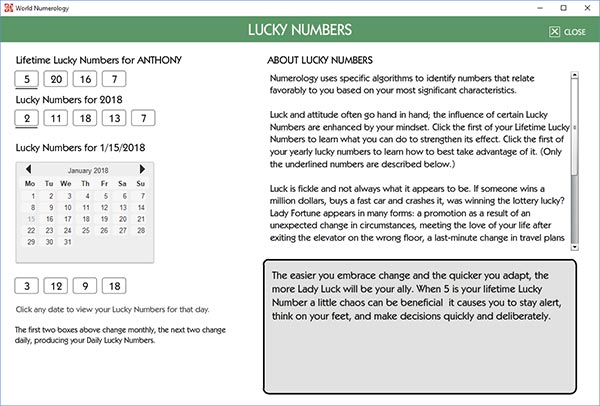 NOTE: Lucky Numbers is only included in our PC , Mac, and iPad versions. It is not included in the mobile versions.

The built-in calendar lets you select your lucky numbers for any day. You should pay particular attention to the last two numbers (sometimes three) as you switch days, as those tend to be the most powerful for that period.

Our Lucky Numbers report can also be purchased as a single reading in PDF format, sent to you in minutes.

What is Your Best Personal Lucky Number?

This is not an easy question to answer, because some lucky numbers are for life - you might say they are part of your DNA - while others come and go based on your cycles, and they are not usually included in a numerology forecast , however, your numerology forecast would be the place to look and find out what specific period in your life is most favorable to take risks regardless of the numbers, and which isn't.

If you want to know what your best lucky number is for a particular day, it is a number based on a complex algorithm that involves calculating your personal year number, and combining it was certain other cycles.

If you want to know what your best lucky number is throughout your life, the answer is easier to calculate; it is your Life Path number.

You can learn more about the history and cultural concept of Lucky Numbers here...

Why and when should I use Lucky Numbers?

Why would you buy five lottery tickets instead of one?

It is important that you understand the true nature and the proper use of Lucky Numbers. In no way, do we advise you to purchase large quantities of lotto tickets or to take your life's earnings to the nearest casino.

While we are convinced of the value of this knowledge, it is also important to be aware of the dangers and misconceptions inherit to this powerful information.

First of all, we, as human beings, are not very good at judging what is lucky and what is unlucky. If someone wins a million dollars in the lottery, buys a fast car, and kills himself with it, was winning the lottery lucky for him?

How to use your Lucky Numbers

Finally, using your Lucky Numbers is not that easy. There are, at any given day, several numbers that apply. Therefore, you may still have to choose among 8 or more numbers.

You may also notice that many numbers, in particular the daily Lucky Numbers, follow a rhythmic pattern. This is because those numbers are derived in part from certain yearly, monthly, and daily cycles, which also appear in a predictable rhythm; much like the seasons and other cyclical events in nature. However, this gradual and logical format is interrupted at certain intervals.

For example, at the beginning of the next month, the numbers may jump forward or backward, breaking the rhythm. Other numbers appear to have no pattern or rhythm whatsoever. Those numbers are derived from other aspects of your personal chart where cycles do not follow a predictable pattern.

LUCKY NUMBERS ARE NOT A GUARANTEE YOU WILL WIN!