Do you have a question about numerology? Use this form to ask Numerologist Hans Decoz.

Birth data details are removed to ensure your privacy. We generally include the first name and month of birth only.

My name is Diana ... I was born in the UK on July .... I am writing as I appear to be at a crossroads in my life. I am currently unemployed and have been for almost a year. I am behind with my mortgage by three months right now. I do manage to make one payment a month then the next month is added I never seem to be able to catch up. I am going to school to get my bachelors degree in accounting now ... I recently got an associates degree in the same subject.

I need to make a move, a decision that will give me a light to the road ahead.

Thanks for your time,
Diana

There is always a variety of issues and circumstances, never just one thing, that can put us at a crossroads. 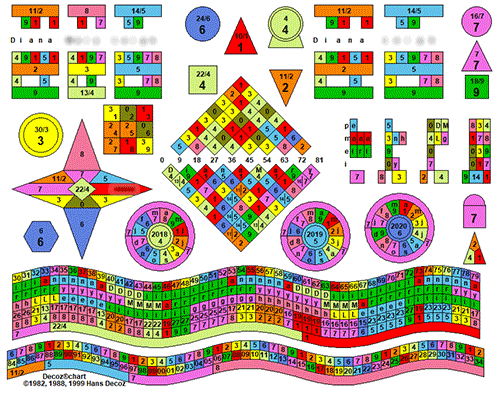 Your chart reveals a series of cycles going back to the middle of 1997 that are difficult and represent a curve in your Life Path, a redirection so to speak, before another twist in the road places you with the wind in your back three years from now.

Before we get into the cycles, I want to point out a few important aspects of the personality part of your chart.
You have a 3 Life Path, a 1 Expression, a 6 Heart's Desire, and a 22/4 Personality.

This tells me your choice of career (accounting) is a superficial one. You don't really want to be an accountant, it just seems an easy fit based on your Personality. Ideally, you should be self-employed or own your own business. It should be creative and producing an actual product as opposed to a service or trading, and it should be bigger than you; in other words, it should first and foremost be driven by passion and idealism, as opposed to practical and predictable.

The keyword here is "ideally, as this, of course, is a pretty big order. There are all kinds of variations possible that could make you happy and content in your career. A position in a large corporation would be fine as long as you don't have someone looking over your shoulder all the time. Creative can be anything from journalist to fashion designer to advertising exec to technical writer. And so forth. (Our Talent Profile could be helpful as it is focused on career options.)

The only number that supports a career in accounting is your Personality number, but that is also the least important among your core numbers in determining a career.

That said, let's look at your cycles. There may have been some pretty overwhelming money issues in 1997 and 1998, but at least you felt yourself to be reasonably confident and capable. The next two years were extremely difficult as, to use an analogy, you felt like a swimmer in one of those pools that create an artificial current, no matter how much effort you put in, you stay in one place. There were probably also some troubling health issues. Around the middle of 2000 and the early part of 2001, your faith in yourself came back, unfortunately, you were also in the kind of situation where you only had yourself to rely on, perhaps divorce or separation or your partner fell ill, something forced you to take charge, and there was little or no support from others.

The next two years saw a number of changes, most of them having to do with letting go; kids moving out, finishing school, the death of someone you had relied on for most of your life - a close friend or a parent, etc.

A period of despair and anxiety during a 7 Essence and a 7 Personal Year overlapping each other the second half of 2003, was also the start of a four year period of self-examination, self-doubt, and simply too much focus on your own inner issues.

The second half of 2007 brought an important change that started a downward spiral financially. The middle of 2008 was the beginning of two years of scattered energy; a lack of any kind of guidance or focus, and a lot of wasted energy. However, it is the change of cycles currently (and for the past 4 to 6 months) happening that requires particular attention. If I had to use just one word to explain, that word would be "weak." The issue at the basis is one of emotional vulnerability and fear, leaving you unable to muster up the strength and determination to push yourself where you want to go. Unfortunately, that feeling is not going to change until sometime between April and September of 2013, at which time you experience important and life-changing realizations, a time of intense self-discovery, followed by a period of aggressive emotional and spiritual growth, and a sense of purpose that sets you off in a new direction, a course of action that has as its most beneficial effect self-empowerment.

Diana, you have both a 22 Personality and a 1 Expression, so I know you have the goods to make things happen, and that is what you need to dig into right now. Stop wondering around in an emotional swamp, stop questioning whether you should have done this or that. Stop thinking about whether this or that person treated you right or not. Stop blaming yourself or others about your circumstances, it's all yesterday's news.

At its most primal, life is actually not that complicated if you shift the focus away from yourself and instead aim it towards goals, dreams, opportunities, and duties. Do what you have to do. And don't question every moment and every event in light of whether it makes you feel good or bad, deserved or undeserved, treated right or wrong.

There is no way to say this gently, Diana, but the only choice you have if you want to get past your current dilemmas, and past the admittedly weak arrangement of numbers for the next couple of years, is to pull yourself up by your boot straps. The numbers in the part of your chart that has to do about you as opposed to your cycles, show that you have what it takes. So go for it. The first thing you will learn is that when you take one step forwards, the universe takes a thousand of them towards you.