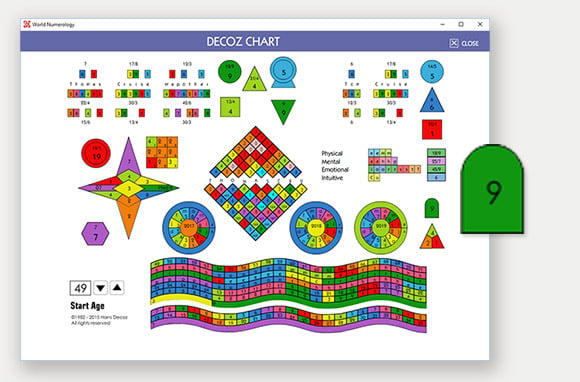 In a numerology chart, the Subconscious Self is represented by the symbol that looks like an arched gateway.

There are two ways to find your Subconscious Self number:

In Tom’s case, since he does not have any missing numbers in his full name at birth (no Karmic Lessons), his Subconscious Self number is 9.

THE MEANING OF THE SUBCONSCIOUS SELF

The Subconscious Self reflects the confidence you have in your personal power and competence, as well as in your ability to deal with sudden events and situations. It shows your capacity to correctly assess a situation and to respond appropriately.

The Subconscious Self is derived from your Karmic Lesson chart, in which it is possible to have all nine numbers represented in your name, or fewer than nine; in fact as few as three or as many as eight. For example, you may be missing a 6 or a 7.

This means that when you encounter a situation that requires the characteristics of a 6 or a 7, there will be some feeling of inadequacy, or uncertainty as to how to properly deal with the demands of the situation.

On the other hand, you still have the other seven or eight numbers represented in you name, which means your ability to deal with situations that require any of those numbers is well-developed. You posses a certain confidence or assurance that makes you feel familiar with the situation, and able to deal with effectively. Hence, a person with eight numbers represented in the name will tend to be more confident in most situations than a person with only five numbers.

In general, someone with eight numbers in his name is quite capable of dealing with most situations.

Paradoxically, a person with all nine numbers represented tends to be aloof or overly complacent when dealing with sudden events.

To learn the meanings of the Subconscious Self number - see page 125 in the book
Numerology: A Complete Guide to Understanding and Using Your Numbers of Destiny