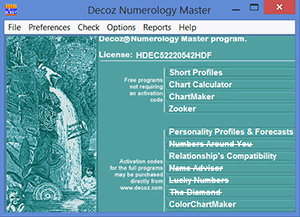 Clicking Personality Profiles and Future Forecasts on the Front Page Interface brings up the Edit Birth Data dialog box with a Set Topics button. Clicking the Set Topics button opens the Topic Selection dialog box. You may turn options on and off to design the reading you want to produce. There are also buttons for a few useful preset combinations

Clicking Relationship's Compon the Front Page Interface brings up the Edit Birth Data dialog box with a Set Topics button. Clicking the Set Topics button opens the Topic Selection dialog box. You may turn options on and off to design the reading you want to produce. You can also set the start and end date to establish the duration of the cycles you want to include.

TIME RANGES AND CYCLES FOR PERSONALITY PROFILES AND FUTURE FORECASTS

The Edit Birth Data dialog box for Personality Profiles and FutureForecasts also contains a Cycles button. Clicking this button brings up a Time Ranges dialog box allowing you to set the duration of the cycles you wish to include in the report.

The first line asks you to "indicate the ages for which you would like Transit and Essence calculations included." Followed by an input box for First age and an input box for the Last age. The default settings are the current age of the individual whose birth data you entered in the Edit Birth Data dialog box, and the age plus two years. You can change the ages to any ages you like.

The third line asks you to "indicate the months for which you would like Personal Months calculations included." Followed by input boxes for the First Month of the year, and the Last month of the year. The default settings are the current month plus 25 months. You can change those settings.

The fourth line asks you to "indicate the months for which you would like Personal Day calculations included." Followed by input boxes for the First Month of the year, and the Last month of the year. The default settings are the current month plus 7 months. You can change those settings.

NOTE:
Keep in mind that each Personal Month for which you include Personal Days is requires 3 to 4 pages. Including 24 months of Personal Days therefore translates to more than 100 pages. In this case, you may find that you get an error message stating: "Line Style Overflow", or "Profiler caused a general protection fault in module DCW.EXE at ........" This means you tried to generate too large a report. You can get past this problem by creating the reading in two, or even three stages.

When you click on Topics in the Edit Birth Data input dialog box for the Relationship program, the Topics Selection dialog box appears. This dialog box also allows you to set the start and end dates for the Personal Year and Personal Month cycles. You can change those settings.

After typing the individual's name and birth data in the Edit Birth Data dialog box and clicking OK to generate the chart, the individual's personal numerology chart appears on your screen.
Along the top of the screen is a menu bar, where you will find the following menu options:
New: Brings you back to the Edit Birth Data dialog box to start a new chart
Print: Opens up your Windows Print utility
Bmap: saves a copy of the chart as a bitmap file in your C:\Decoz\Reports folder

By clicking Options, you bring up a dialog box in which you may make a few choices affecting the drawing style. You can choose thin (1 pixel) or thick (2 pixels) lines. Letters & numbers can be drawn either normally or boldfaced. A good combination is thin & boldface - this is the default setting. Color can be turned on or off. Print resolution can be set to High or Low (96 dots per inch). This option affects only the printout, not what you see on the screen. See also the note below.

Chart: Displays the chart you just made (this is the default setting)
Layout: Displays a graphical view of how the chart is laid out and what the numbers refer to (See also Mathematical Procedures.)

Zoom in: Displays detail of a portion of the chart
Zoom out: Displays the entire chart
Help: Offers access to the Help file, and About tells you about the software program.

With the chart visible on your monitor, click Print in the menu bar. At this point, the chart is handed over to your Windows Print utility with all the usual options. The chart is already set to print in "landscape" mode to fit on a standard 8.5 by 11 inch paper.
NOTE: When you print the chart, you will be printing a fairly large bitmap. In particular, with Print Resolution set to High, the output size may be too big for your printer's memory. If you find that you can not print a chart, you may need to set the Print Resolution to Low (click Options).

When you click "Bmap", your chart is saved as a bitmap file in the Readings folder of the Master Numerology program.

To see how the chart is laid out (ie, what symbols correspond to the various numerology topics) click View>Layout on the ColorChartMaker menu bar. Click View>Chart to return to your chart. The following descriptions are meant to help you find particular items on the chart. You will find ZoomIn handy; use it in conjunction with the two scroll bars.

Life Path: you will find this number inside the two concentric circles on the left side of the chart.

Pinnacles: the Pinnacles are placed above the date of birth found in the star; the 1st Pinnacle is on the left, the 2nd Pinnacle on the right, the 3rd Pinnacle in the center, and the 4th Pinnacle at the top.

Expression: you will find the name numbers directly below the full name at birth, the single-digit numbers on the next row, and the Expression number itself inside the triangle to the right of the birth name.

Balance: the Balance number can be found inside the upside-down triangle to the right of the full name at birth.

Maturity: the Maturity number appears in the center of the two concentric circles sitting on a triangular base, at the top of the chart.

Minor Expression: can be found inside the triangle to the right of the current name.

Minor Heart's Desire: can be found inside the circle to the right of the current name.

Minor Personality: can be found inside the square to the right of the current name.

Karmic Lessons: see the square sub-divided in 9 squares and located to the right of the star and below the section devoted to the full name. In the lower corner of each of the 9 squares you will find the single-digit to which that particular square is assigned. In the top of each square you will see how many letters with the value of that particular number are found in the full name at birth. If this number is 0, then the number to which this square is dedicated is missing in the name. This is a Karmic Lesson number.

Planes of Expression: These are shown in the rectangular group of letters and numbers to the right of the central diamond. Each row represents one of the four Planes of Expression (physical, mental, emotional, and intuitive). All the letters in the full name at birth are used. The letters of the birth name are divided into twelve groups: the four rows correspond to the four planes, while the three columns distinguish the letters as creative, grounded, or vacillating. The counts of letters found among each of these groups, and their numeric values, indicate how "physical" or "intuitive" a person is. The numbers you see are row and column sums of these values.

Subconscious Self: this number is placed within the square and half circle symbol found on the right side of the chart.

Key: the Key appears in the top of the 3-part triangle on the right side of the chart directly above the "wave."

Capstone: is located in the lower right of the 3-part triangle.

Cornerstone: placed in the lower left of the 3-part triangle.

The wheel-shaped symbols contain the Personal Year Cycle for each given year, along with the year itself, inside the center circle. The 12 sections represent the 12 months of the year, starting at "9 o'clock" with January, and proceeding clockwise. Only the first letter of the month is placed within each section. The single-digit number found in each section represents the Personal Month number for that month.
The outer ring, at the "9 o'clock" position, contains the Essence Cycle number influencing the individual at the start of the year. A short dividing line is placed on the outer ring at approximately the location of the individual's month and day of birth. Directly next to this dividing line, we find the number representing the Essence Cycle number for the rest of the year following the individual's birthday.

The wave section consists of 10 rows. Each row is divided into 49 sections, one for each year. The wave can start at age 0 or any age you choose.

The top row of the wave indicates the individual's age at any given year.

(note: all Transits are based on the full name at birth.)
The second row of the wave is devoted to the Physical Transits and contains the letters found in the individual's first name. Each letter covers a number of years equal to the value of the letter. For example, if the person's name is John, the first year of John's life, from age 0 to age 1, is covered by the "J" and lasts one year, because the value of the letter "J" is 1. The next six years are covered by the letter "O" because the "O" has the value of 6. The "H" has a value of 8 and covers the next eight years. The next five years are influenced by the letter "N" which has a value of 5. At the end of those five years we start over with the letter "J." The Physical Transit reflects the influences and events on the physical plane.

The Pinnacle Cycles are placed on the last row of the wave.

Time Ranges: Setting the starting date and ending dates of the cycles

What NOT to do with your numerology software